TRENTON – New unemployment claims declined slightly last week, to 10,384* – their lowest level in 52 weeks – as the New Jersey Department of Labor and Workforce Development continued its historic pace of providing unemployment benefits to residents in need, with $23.8 billion distributed in the year since COVID-19 took hold.

For the week ending Feb. 27, New Jersey recorded 392 fewer new unemployment filings compared with the prior week, a 3.5 percent decrease, the third straight week of declines.

However, the Department has seen 2,034,337** new jobless claims in the past year, a number that far eclipses any other period. With hundreds of thousands of claimants reaching the end of their benefit year between now and the end of April, the Labor Department announced good news this week for these claimants: They will not have to file a new claim for their benefits to continue.

The Department has developed programming to review these claims on a large scale as required by federal law, without the claimant having to take action. In fact, existing claimants are urged not to file a new claim, as doing so will delay their benefits. Once the review is complete, they will receive confirmation their certification was successful when they claim their weekly benefits.

“Our goal is to make this a seamless transition for the majority of claimants,” said Labor Commissioner Robert Asaro-Angelo. “We have been preparing for this eventuality for months, knowing that the tsunami of claims we witnessed last Spring would expire en masse beginning in mid-March.”

The Department also plans to process a new batch of FEMA Lost Wages Assistance payments for claimants who have become eligible for this federal benefit retroactively since the last time the payments were processed. Eligible claimants can expect to receive separate payments in their direct deposit accounts or debit cards early next week.

Here are the week-by-week totals of new unemployment claims: 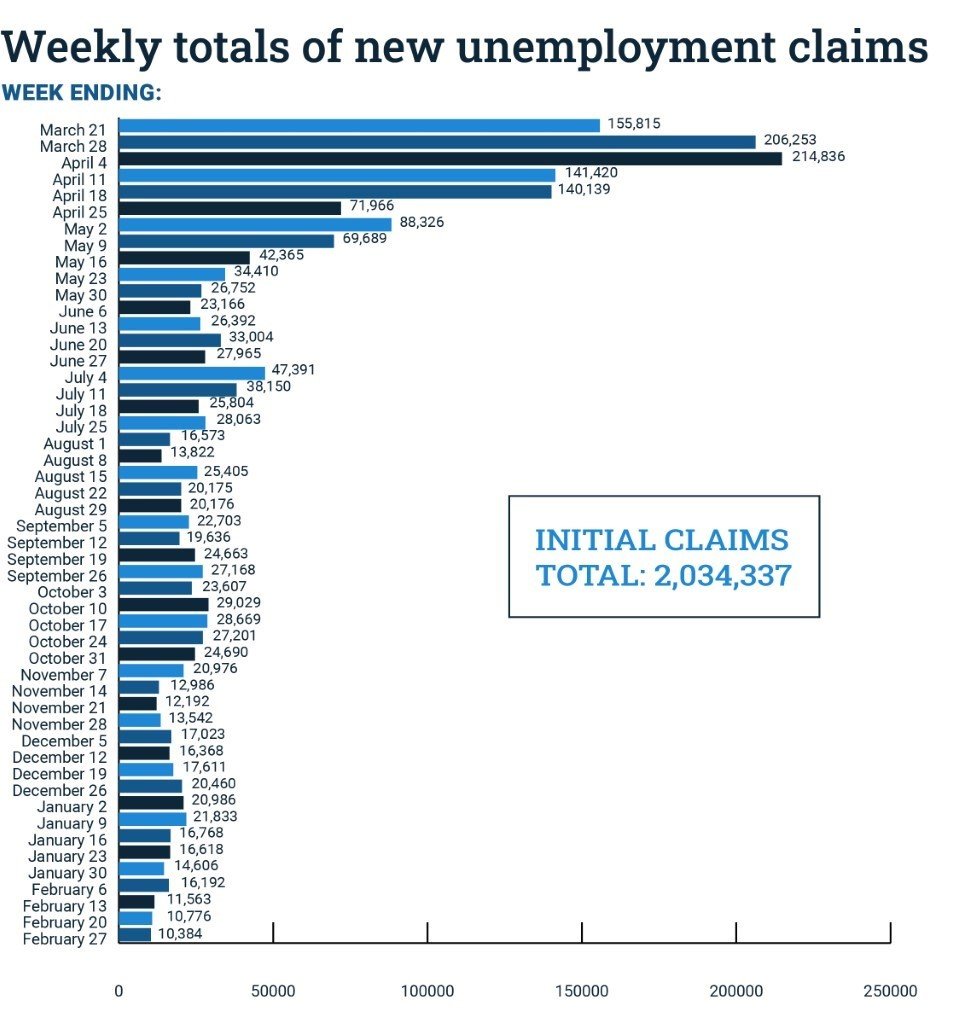 Here is the breakdown of weekly benefits payments to eligible New Jersey workers: 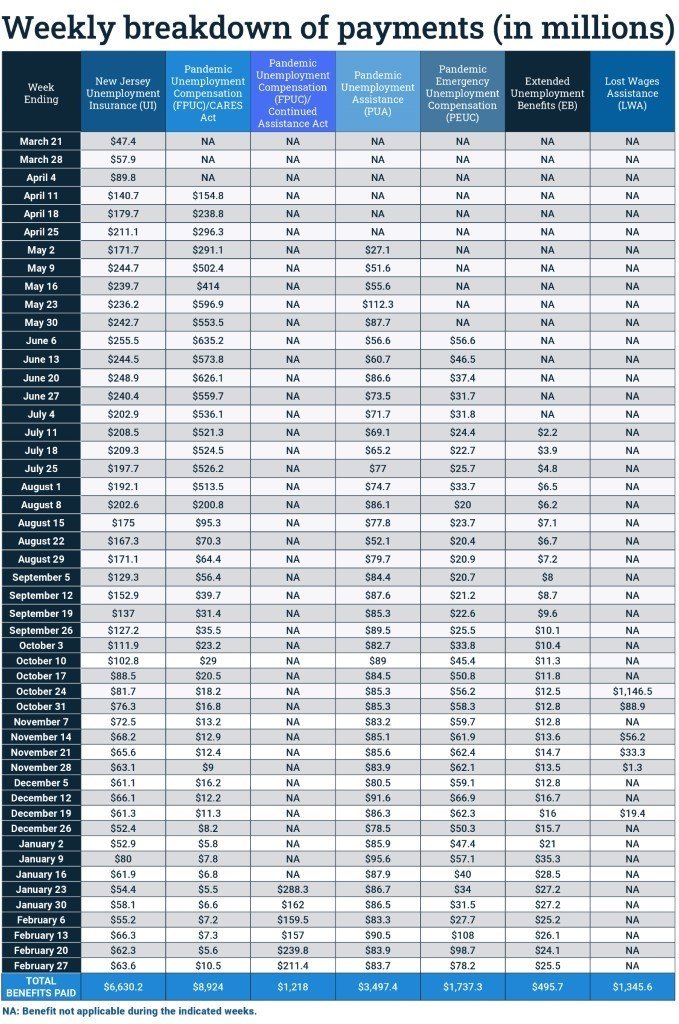 PUA and PEUC were authorized by Congress under the CARES Act through Dec. 26, 2020, then extended under the Continued Assistance to Unemployed Workers Act through March 13. The maximum eligibility for PUA is now 57 weeks. PEUC now provides up to 24 weeks of additional benefits to those who exhaust 26 weeks of state unemployment. Extended benefits (EB) adds a final 20 weeks of benefits. The renewed FPUC benefit is a $300/week unemployment supplement for anyone collecting unemployment in any amount; the original program, which provided $600/week in supplemental benefits, expired in July. Lost Wages Assistance (LWA) was funded by FEMA and provided six weeks of supplemental benefits to people unemployed Aug. 1 through Sept. 5, 2020 due to COVID.

*This represents the final number for the week ending Feb. 27. The number listed for New Jersey by the US Department of Labor – 9,212 – is based on advanced reporting.

**This number includes 235,348 claims that have been reopened by residents who returned to unemployment after a period of employment within a calendar year, as well as claims that later turned out to be fraudulent.

Article Courtesy of the NJDOL