The number of new unemployment claims fell for the second straight week last week – to 10,534* – which is about 130,000 fewer weekly claims than the Department of Labor and Workforce Development reported for the same week a year ago, at the height of the first wave of the COVID-19 pandemic.

Also last week, New Jersey triggered off of federal High Extended Benefits, which afforded an additional seven weeks of extended benefits to eligible claimants. High Extended Benefits – which increases the duration of extended benefits from 13 to 20 weeks – is triggered when the state’s three-month average unemployment rate is 8 percent or higher. The average for the past three months in New Jersey is 7.7 percent.

Claims impacted by this status change will be automatically and seamlessly moved on to Pandemic Emergency Unemployment Compensation (PEUC) to continue receiving their remaining benefits. No action by claimants is needed. In essence, there will be no affect on claimants through Sept. 4, when PEUC and other pandemic rescue programs expire.

The Department distributed $416 million in benefits last week, for a cumulative total of $26.9 billion dispensed to jobless New Jersey workers. The average claimant in New Jersey has received $17,827 in benefits.

“New Jersey is leading the way on many fronts in getting benefits to workers, but we know this is no solace to those waiting for a determination or a better understanding of the status of their claim,” said Labor Commissioner Robert Asaro-Angelo. “This continues to motivate our teams to try so hard to determine that workers are eligible, and to deliver benefits as quickly as possible them.”

NJDOL has also begun verifying the wages of Pandemic Unemployment Assistance (PUA) recipients, as per federal law. The Continued Assistance for Unemployed Workers Act of 2020 requires independent contractors, self-employed individuals and others receiving PUA to submit proof of income to continue to receiving benefits. These claimants are being notified via email with detailed instructions and deadlines.

Here are the week-by-week totals of new unemployment claims: 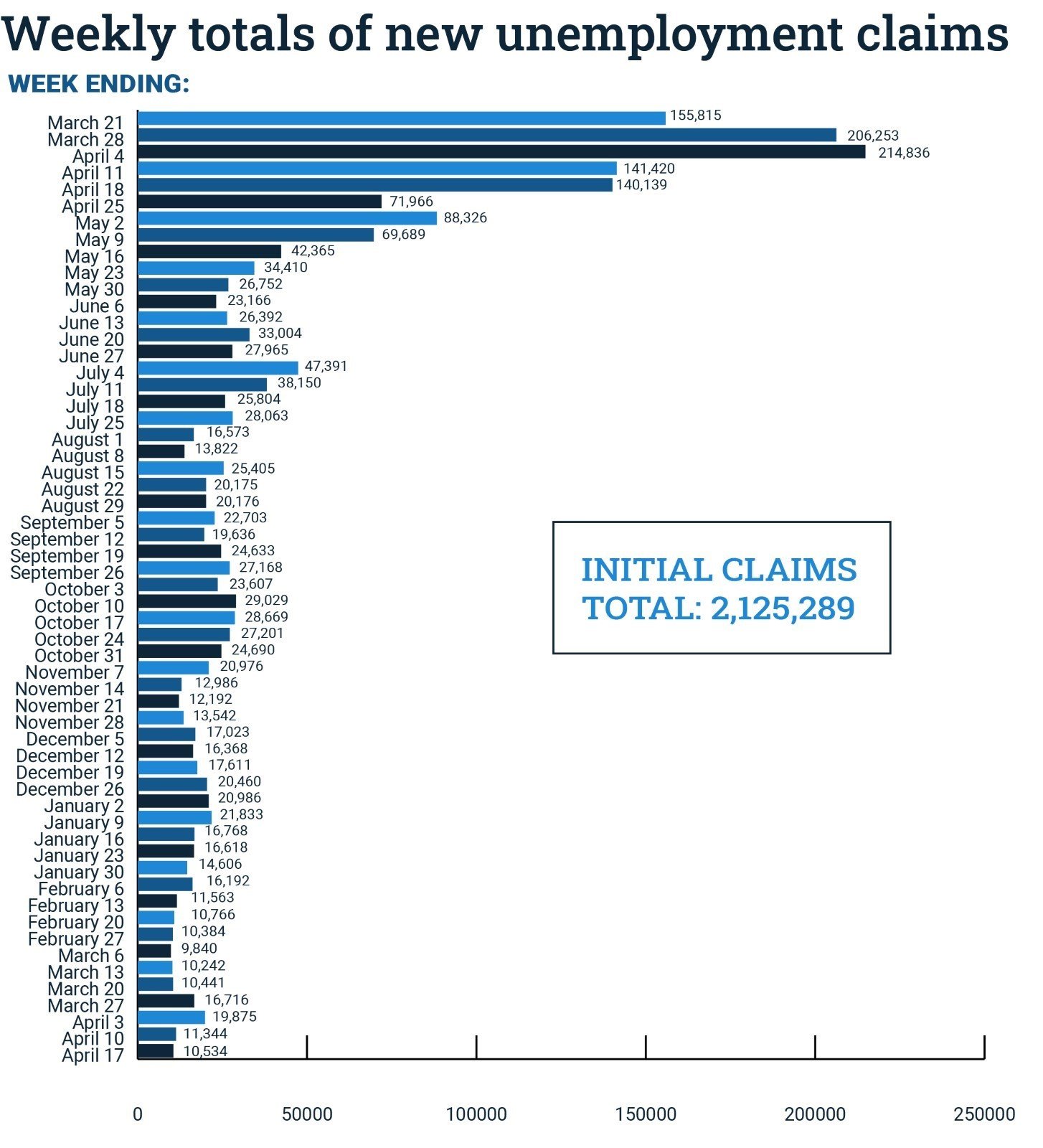 Here is the breakdown of weekly benefits payments to eligible New Jersey workers:

The maximum eligibility for PUA is now 75 weeks. PEUC now provides up to 49 weeks of additional benefits to those who exhaust 26 weeks of state unemployment. Extended benefits (EB) adds 13 weeks. The $300 FPUC supplement is for anyone collecting unemployment in any amount during eligible weeks. There is also a provision in the new rescue law that excludes the first $10,200 of unemployment benefits from having to be reported as income on federal taxes for households earning less than $150,000/year.

Information on virtual Career Services can be found here: nj.gov/labor/career-services.

*This represents the final number for the week ending April 17. The number listed for New Jersey by the US Department of Labor – 9,527– is based on advanced reporting.

**The number of new initial claims includes 258,629 claims that have been reopened by residents who returned to unemployment after a period of employment within a calendar year, as well as claims that turned out to be fraudulent.

Article Courtesy of the New Jersey Department of Labor